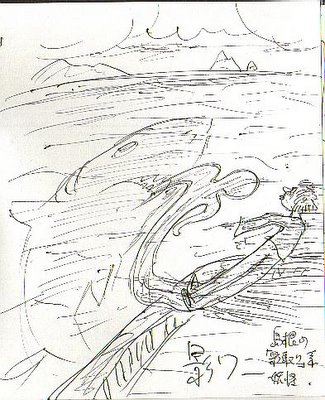 影ワニ kage_wani=shark that feeds on shadow,japan
This is a story told between fishermen. "SAME(=shark)" was called "WANI(=crocodile)" in Japan. The fisherman who went out to fishing by the boat sees shark's appearance at sea. Fisherman's shadow had expanded in the sea. The shark hold it in one's mouth, and drags it in to the sea with the fisherman's body. Or, the fisherman will die as soon as it did. This looks like the legend of general "shadow removing" well in Europe. The legend of "shadow removing" is handed down in various places in Japan.
Posted by Unknown at 12:39 PM