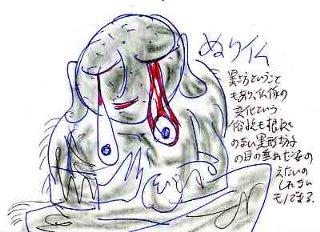 It settles in the dilapidated temple, and the person who visited is surprised. It looks like a black buddhist statue. When the traveler approaches,the eyeball is dropped and it begins to move. It was said that the Asian racoon had disguised. "Nuri" had been used as a prefix that meens a big mysterious thing in old Japan."Nuri_kabe" or "Nuri_bou" is used also for the name of the big musterious apparition.
Posted by Unknown at 3:49 PM