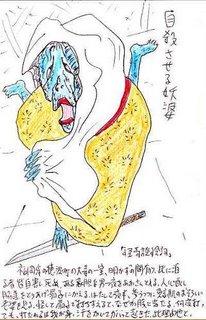 自殺させる妖婆That presses suicide,japan
There was "Room not opened" in a big temple in Fukuoka Prefecture in Edo period. The person who stayed here cut the belly ("Harakiri") and commit suicide every times. One man said staying at this room to confirm true colors.People took up his sword for attention,and instead gave a fan.In the middle of the night there was an eerie old woman who had the skin like the dogfish by the bed when he woke up. He took up the fan and beat it,but he felt the pain his belly.His fan beat himself.No matter how he struck it, the fan hit his belly. He woke up "again",and frightened. He spoke this as the cause to which those who commit suicide happen frequently next morning.
Posted by Unknown at 1:16 PM