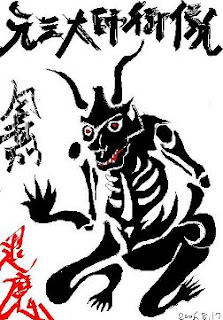 Legend high priest who existed in Mt.Hiei (temple) in Kyoto. He,Ryogen良源（元三大師） had strong mysterious power. He was changed to the appearance of the satan that put out horns by the power when the epidemic went around, and repulsed the satan who made the cause of the epidemic. The picture that draws the appearance is believed in as an amulet now. Ryogen was rumored that had the other various ESPs, and postmortem also catching lightning in a bottle. He is called by the name of Tsuno_Daishi means "horn saint".
Posted by Unknown at 1:10 AM