Spirit that some occultists produce and sell in Japan.Occultists insist that they can make it.It is enclosed in a small bottle, and the name of arms is applied. The one named "FOBS" is famous.
It is not visible.It is assumed that it has temporary power of curse, and a realistic effect. We can see the influence of the occultism in the West , and also "Pokemon". In the old Japanese mystery principle, there were a kind of spirit, "SHIKI", and magicians of the "Onnmyou_dou" used it oftenly.SHIKI was employed by the "Onnmyou_ji",and took various actions as the magician ordered it. It looks like the existence of the heaven that was called "Douji" (meens "Child") that the high Buddhism priest employed. It seems that each idea was transmitted from ancient China. This idea often appears in the manga. 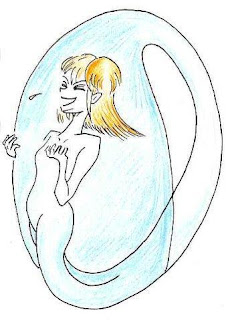