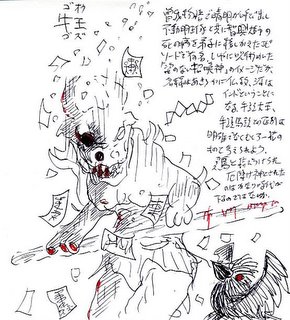 It is originally a god in India, it is told to Japan through the Buddhism culture of China, it mixes with the god of old Japan Shintoism, and it has changed. There was the famous enchantment master person who studied a kind of religion that came from China named ONMYOUDOU（the positive and negative road）thoroughly) named "Abe_no_seimei" thousand years ago in the strong existence.It is said that he borrows this god's power and the serious illness of the priest with a high place was moved to priest's apprentice's body.
Posted by Unknown at 12:12 AM