天井を這う老婆 The old woman who crawls on a ceiling 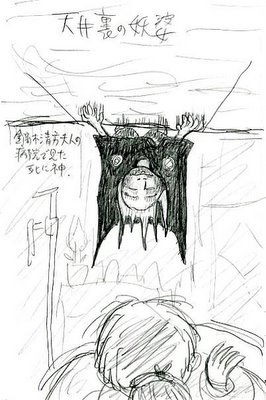 The witch was witnessed when Mrs.Kaburagi (her husband was the famous japanese painter,Kiyokata Kaburagi)was sent to hospital. When she looked up the ceiling in the single room of a hospital, the old woman was crawling there upside down. She was frightened ,but gazed at the old woman,and then it went away outside. The voice which makes noise from the next room soon was able to be heard.Heard by her later, the patient of the next room passed away then. The similar talk is told from the Edo period and called by the name a "Toori_akuma(kind evil spirit)."
Posted by Unknown at 3:51 PM