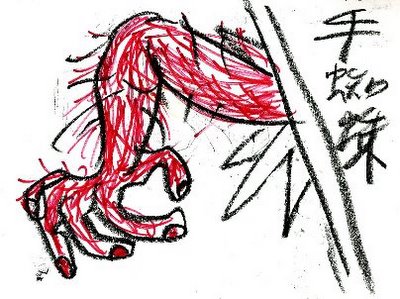 ... This is the name of a place which actually suited Akita Prefecture. Since the following traditions were there, it was named.

The door which the lock of a house required pulled suddenly in the dead of night, and was broken, and one big red arm thrust in. Although the family shuddered up, the arm withdrewed immediately as it was. However, the door was broken and the arm thrust in at the time same after that every night. The family thought that it would kill all of them, and moved from that house.

In another report,one young samurai appeared after that,and eradicated it that was the "monster with eight thick legs 10 feets or more" which lurked in the neighborhood. In Japan, the monster "TUCHI_GUMO(the ground spider)" handed down for many years was also called the true character.
Posted by Unknown at 6:31 PM