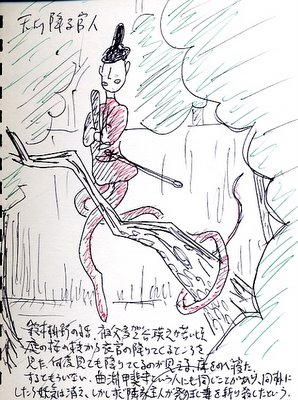 It was one of many satans who lived in Edo city. There was a samurai who saw strange Hit dressed up get off the garden tree in the house. Hit existed, and got off the tree fast no matter how he saw. The samurai calmed down the mind, left the place, and slept in bed. Then, the full voice had been heard from a house next door after a while. Neighbours said that the next door's samurai in a suddenly crazy killed cutting her wife people. A similar story was often written down in Edo period. For example,suddeenly one samurai saw many soldiers who surrounded the outside of his house's wall around, and he prostrated to their figures while long times,and disappeared.the bad thing happened in neighbour's house also.Or when a woman saw outside from her house,there was an elderly person who steped on the mark in the house of which had burned down,and walked to her. she made her mind to calm down and shut down her eyes, and it disappeared.The old woman who crawled the ceiling in the hospital that wrote in the another paragraph might be the descendant. Similar tale is written about a small street satan 1000 years ago. It might have been a phenomenon that the enchantment had been put on these.
Posted by Unknown at 10:42 AM