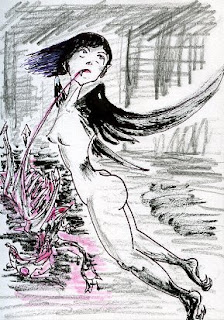 アスワン aswang(=vampire woman),phillipine
The rumor concerning this vampire is confused (As well as other rumors). Apparition legend of Southeast Asia" is what mostly a lot of rumors and the legends mixed it. The case of it that cannot be fixed to a specific appearance is extremely abundant. The most general appearance of aswang is the folk tale one. In a word,It is "fanciful",and ugly. One woman's upper-body separates at night, it floats, and the child and the pregnant woman are attacked. Aswang indoors hangs a long tongue down from the roof, and breathes in the blood of the sleeping victim. Aswang can go in and out also in a small window because it is small(only an upper body). Aswang might breathe in blood biting directly. The appearance of aswang often comes in succession with the image of the bat. The apparition in the former colony also has the rumor that is the possibility of received the influence of an old suzerain, and thought to be an inflow from Europe actually. There is an influence of the vampire in this vampire's "Part" Europe and it will not be able to be negative. However, the rumor of the aswang appearance doesn't discontinue now. Though most is a fake. 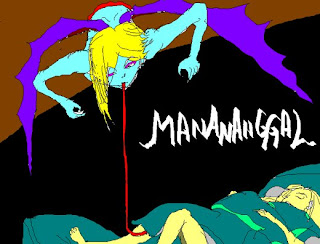 What you are describing is actually called a "manananggal" (from the root word "tanggal" which means "remove"). A manananggal can be loosely described as an aswang but not all aswangs are mananaggals.

Thank you. The one that I learnt as "Aswang" was "Manananggal" that you had explained. I understand.